What does the Customised firmware allow me to do?

Add extra or enhanced features to your Humax HDR FOX T2 and HD FOX T2. Some features will add 'Every Day' enhancements such as Add to recording schedule remotely, Add more sites to the Humax Portal and Auto Unprotection of Hi-Def programs, while other utilities are for advanced developers. An overview of the Custom Firmware features are listed HERE

What will happen if / when Humax transmits an Over-the-air (OTA) update?

How can I compile software to run on the Humax?

Have a look at the Compile Software for the Humax and Create Packages HOW-TOs.

What Does this EPG Icon Mean? 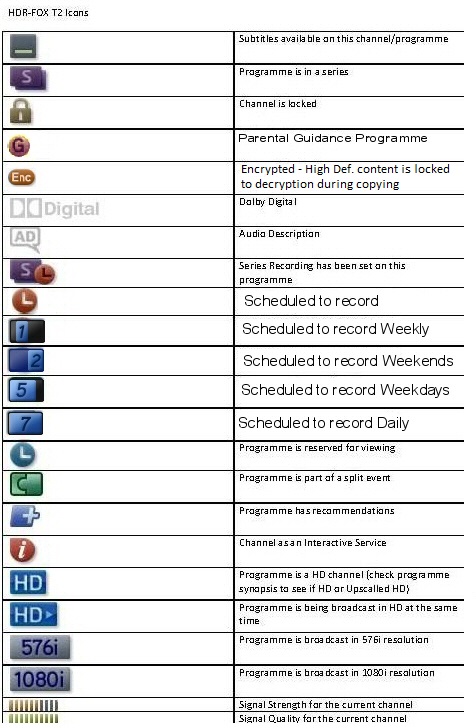 What Does this Front Panel Icon Mean?

Where is the Remote Control Sensor?

Why is My Remote Flashing all the Mode LEDS ?

If your Remote Flashes all four 'Mode' LEDS in sequence when you press the green power button, it is indicating that the battery level is low.

How to avoid Remote Macro Problems

Many ‘All-in-One’ / Harmony type Remote Controls have a ‘Macro’ facility, where a single key press will send multiple commands to carry out a series of operations. However problems can occur when the original remote control uses a single button to toggle power On / Off functions because different pieces of equipment may already be in the desired state. Sony and several other makers get around this by having separate buttons for On and Off, however the Humax remote doesn’t have this.

Send ‘000’ to the Humax HDR T2 as a ‘Turn On Only’ signal, thereby getting around the possible ‘out of synchronisation’ problem. It has been reported that on some remotes a single 'Zero' for 3 seconds works better than 'Zero, Zero, Zero'.

How do I remove Channel Duplicates?

If you have channel numbers between 800 and 899 they need to be removed. These channels are duplicates and have been allocated their 800+ number by the Humax. It has been reported that signals from duplicate channels can stop Accurate Recording from functioning correctly. Also the Humax does not always allocate the strongest signal channel first, this results in poor reception on the ‘Main’ channels and better reception on the unused 800’s channels.

Note:- The following procedure will remove your recording schedule (but not recordings) and also your Favourites list so make a note of them before carrying out a re-scan.

There are a few to choose from including Humax's own, It has been reported that to work with the Humax, dongles must have the RALINK 3070 chipset.

While it won't be a lot of use to you deciding which dongle to purchase, custom firmware users can confirm whether a plugged-in dongle (working or not) is indeed 3070-based using a command on the Telnet or Webshell command line:

The output should be a series of lines of text, including something like this:

The following are reported to work on the Humax :-

The following have been reported as both working and not working SO BEWARE :-

The following are reported NOT to work on the Humax :-

Will a Gigabit network speed up my Humax

In a word, no. The Humax LAN is 10/100 baseT i.e. maximum 100 Mb/s. Although the Humax can be connected to a Gigabit switch such as the one HERE, (also a router or hub), all traffic to and from the Humax will still be limited to 100 Mb/s maximum. 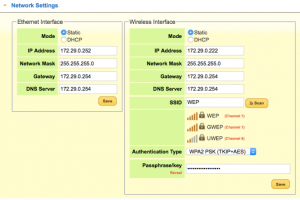 The standard 'On-TV-Screen' settings for your Humax's WiFi password is restricted to alpha-numerics only. This would require a user to change the Wi-Fi password used on all equipment connected to the router, in order to get the Humax to connect via Wi-Fi. However these settings can also be edited from the Web-If >> Settings >> Network Settings screen. In this screen both Ethernet and Wi-Fi settings can be edited and passwords / keywords can use any ASCII characters e.g. %#<> [SPACE] etc.

If you have forgotten your Web-If password you can reset it by accessing the Humax Telnet screen.

or you can reset it by entering the following Telnet command line :-

How do I restart the Web-If GUI?

If you have a problem the Web-If Graphical User Interface, it can be re-started from Telnet as follows :-

How do I set the MTU on my Humax?

If you get error messages like this "Resource temporarily unavailable. Error retrieving package list from the Internet. Please check your connection and try again." you may need to change your Maximum Transmission Unit (MTU) size in order to prevent packets being fragmented. If you need to fix the MTU on your humax, it can be achieved via Telnet as follows :-

Check for notification of any fragmentation during transmission of a given packet size by using ping, e.g. :-

Why is my Humax Half Awake?

The Humax can be in 3 distinct powered states, they are :-

The Humax is expected to be in the Half awake state while :-

The Humax can also unexpectedly enter the half awake state due to :-

How Do I Test My HDD?

Humax has built a Hard Disk Drive test routine into version 1.02.28 of its software. This routine will only test the internal Hard disk of the HDR and is initiated as follows :- Menu >> Settings >> System >> Data Storage >> HDD Test. Also Custom Firmware 2.12 has a built-in HDD utility called Fix-Disk See Notes HERE

What format should be used for a USB HDD

If you want to use a USB Hard disk drive on your Humax, there are several formats that can be used. However there is no perfect solution because they all have pros and cons that need to be considered e.g. :-

How do I convert a drive to EXT2?

If you are using a USB Flash device to record to (HD-FOX T2 only >32GB) or as a backup device, the Humax will only use EXT3 as a format mode. Due to journalling, it is recommended that a Flash device be converted to the EXT2 format to prolong its life. Here is the procedure to use after a Humax format. NOTE :- tune2fs is part of the Custom Firmware package E2fs_Progs and is also built-in to Custom Firmware Version 2.12 and later.

If it is an HD then presumably the disk will be /dev/sda but it is best to make sure using Fdisk. This should show the size of the disk and the available partitions e.g. for an 8GB USB Flash device

Unmount the partition if already mounted with :-

What Hardware / Software clashes with the Humax?

You must also make the new file executable by sending this command line :- chmod 755 /mod/etc/init.d/S22nasroute

How do I format HDD when it is 'Too Large'

When you get the message Cannot Format - Capacity too large, it is best to put the box into RMA mode if you're planning to format the disk. That stops the CFW from starting anything up that might stop the disk from being unmounted. Once re-formatted, you can drop out of RMA via the telnet menu and then re-install. Reverting to standard firmware may also work

Why has my Humax's IP address changed?

Your Humax's IP address in Menu >> Settings >> System >> Internet Settings >> Configure LAN can change for several reasons depending on whether it is setup for DHCP or Manual operation. In DHCP mode you can expect the last set of digits to be allocated by your router over a certain range, so if your router is set to 192.168.123.xxx, any address in the range 192.168.123.001 to 192.168.123.254 can be expected, A failed DHCP allocation can result in an IP in the range 169.254.x.x being allocated. In Manual mode you would not expect your Humax's IP address to change, however if an unexpected address starting with 192.2.x.x is displayed the Humax has reset to factory default for some reason

Which DNS server should I be using?

There are several places on the internet that provide DNS look-up services, however users have reported 8.8.8.8 causes problems on the Humax, 208.67.222.222 has been reported to be more reliable

Why are sidecar files missing after a copy

Why does File Type xyz not appear in the Web-If

By default only certain file types are displayed in the Web-If, for example to add m4v files, edit the /mod/webif/html/browse/index.jim 'set include' line as follows :-

Where can I get spare parts for my Humax?

How Can I fix / Get around problem XYZ?

You could have a look at our Fixes & Work Arounds Page

Still no luck. Where can I ask for help?

Visit the hummy.tv forums for more help. They're a friendly bunch!