The Fixes / Work Arounds detailed here are primarily for the HUMAX HDR FOX T2 with 1.02.20 software but will in a lot of cases also work on the HUMAX HD FOX T2

The work around for this is to re-select the program for playing and press stop before navigating away from the program, It will then be possible to delete the ‘Stopped’ program

Steps for removal of the orange filter :-

When selecting 'Download' in the Web-If the file is played on your P.C. but not stored in a file, this is due to the *.TS file being associated with a media player, so the file is streamed instead of stored, If the association is removed then the file will be downloaded rather than played

In some cases it may be possible to instruct the media played not to automatically 'play' a certain type of file and this should be tried first, however it is quite common to be able to change an association (to another media player) but possible to remove the association all together. It is possible to remove the association using Start >> Run >> regedit. BUT you must be careful as regedit is very powerful and can stop Windows working completely. Navigate to ComDlg3 >> OpenSaveMRU >> TS (path shown at the bottom) and delete the entry where 'value not set' is shown

This bug is caused by the user inadvertently entering the current channel again from the remote, So while watching channel 1 with a fully working remote press ‘1’, There will be a ---1 display on the TV for a couple of seconds and then all appears to be as it was, However all 9 functions listed above are now disabled

The only work around for this is to select another TV channel which will of course delete the current Time Shift buffer, So this is not a very satisfactory work around

If you have more than one HUMAX product in the same room (say Freeview and Freesat) you may find that their remotes control the wrong receiver, This procedure will synchronize a remote / receiver using an alternative set of remote codes

It has been confirmed by several users that both the HDR-Fox T2 and HD-Fox T2 will not accept a DLNA streamed file of more than 4G Bytes, The Humax boxes appears to be capable of ‘outputting’ file streams larger than 4G Bytes (in Server mode), But will cut short any received file stream (in client mode) that is bigger than 4G Bytes

Humax have released firmware version (1.02.28) which resolves this problem. Another possible Workaround for this problem is to split the video file into smaller segments, This is possible using a Custom Firmware Utility HERE

There are lots of reason your remote may not be working, This article covers some common causes.

One or more buttons become unresponsive

You may need to clean the rear of the buttons, Instructions for opening the case are HERE

Infra Red interference - The remote becomes erratic / sluggish in operation or the Humax may appear to be being 'controlled' by the remote when no buttons are pressed, this is usually due the Infra Red signals being blocked or added to by one of the following :-

NOTE This has been reported by user : iFlid, It is not clear if these units produce Infra-Red interference, although it's very probable they produce some Radio interference 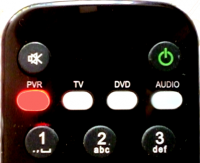 Incorrect mode - The HDR/HD Fox T2 remote can control three extra devices as well as the Humax it was supplied with, a common ‘User Error’ is caused by the user inadvertently pressing one of the TV, DVD or Audio Buttons and de-selecting the PVR function

Humax have added on-screen indication of which 'mode' the Remote Control is in to firmware version 1.02.28, this only works on remotes that are labelled 'MDB 1.3' inside the battery compartment (Not ADB 1.0). While pressing any 'non white' button on the remote note which white button lights up red, If you are expecting to control the PVR you should expect the PVR LED to light, If it doesn't press PVR and this mode will be retained until another ‘white’ button is pressed

You can check if your remote is working by viewing the IR emitter on a Digital camera display screen, as they can ‘See’ the invisible Infra-Red light

It has been quite widely reported that under certain circumstances series recordings have failed when the Humax has been left un-attended for extended periods, This is due to the unit not periodically updating the EPG, The problem has been noticed more often for Padding Users due to ‘Rules 4 & 5’ 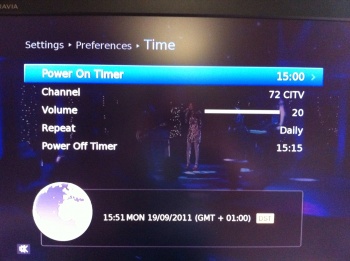 Here are a set of rules that apply to EPG update :-

This problem would effect 'Padding' users after not turning on the Humax for 7 days and would only effect Accurate Recording if nothing at all was scheduled except a fortnightly series recording.

Apply Item 6 above, This can be achieved by setting a daily Auto On / Off timer, e.g. Menu >> Settings >> Preferences >> Time and entering a Power On timer at a quite period say 5:00am and a Power Off Timer 15 Minutes later

Run the Fix Disk Utility built into Custom Firmware, this will automatically try to fix the *Deleting problem

TS files from the Humax do not retain their subtitles after being trimmed using external editor programs.

Video-ReDo is one editor that is known to retain the subtitle stream. Selecting 'Save As M2TS' rather than saving it as a 'TS' file will create the 192 byte packet format video stream native to the Humax. All that remains to do is manually re-name the generated M2TS file back to a TS file before importing the file back to the Humax. This enables new hmt and nts files to be created using the sidecar utility. The result is an edited recording which can be played on the Humax complete with subtitles, and all playback functions like seek, fast forward, and rewind, enabled.