Note: This Blog was written prior to the release of the 1.03.xx firmware, When running 1.03.xx firmware the Humax is capable of formatting and 4K aligning a new 2TB hard drive

I've just replaced the hard disk in my Humax HDR Fox-T2 with a 2TB drive as my original factory-fitted 1TB drive has recently suffered from a bad sector which somehow corrupted all large reads and writes to the disk. I was able to force the drive to overwrite the sector which resolved the immediate problem (old recordings now play-back successfully but those recordings made during the problem have artifacts). However, I've lost confidence in the disk and it's making a lot more clicking noises in operation than it did previously; that said, it's never been particularly quiet. Besides, who would pass up the chance to double the capacity?

There are a couple of good write-ups on how to replace the drive (e.g. http://myhumax.org/blog/?p=22), but these rely on an interim step of plugging the drive into a desktop computer (usually Linux) in order to partition and format the drive. I wanted a process which could be done entirely on the Humax itself in conjunction with the customised firmware.

Since I was replacing the drive anyway, I wanted to go for the largest amount of storage that was practical, especially as there is typically only a relatively small incremental cost each time you double the capacity.

However, the Linux kernel that is used on the Humax HDR Fox-T2 does not support disks with a GUID Partition Table (GPT) which is required if you want any partitions to be larger than 2TB. (See http://en.wikipedia.org/wiki/GUID_Partition_Table for more details) That gives a practical upper bound to the drive size since almost all of it is allocated to the media partition. It would likely be possible to use a custom kernel on the Humax and add support for GPTs but that could cause other issues and any reversion to standard Humax firmware would be problematic.

Also, the Humax firmware can neither partition nor format an internal drive which is over 1TB in size, but there are several reports of people who have successfully installed a 2TB drive having manually partitioned and formatted it. In fact there are 14 HDR devices registered with the hummypkg remote scheduling portal which have a 2TB drive.

Whichever drive is chosen, it should be one specifically designed for use in a PVR. These drives are known as CE or AV drives and are optimised for AV content. They generally run cooler and quieter than desktop drives as well as consuming less power. They also behave differently as regards error detection, correction and reporting. A single read/write error when recording AV content usually matters a lot less than a pause while the drive or application stops, waits for the disk platter to revolve again then retries the read.

On the down side, I couldn't find any reports of anyone using one of these drives in their Humax. The drive that has most often been used by others is the Western Digital AV-GP (WD20EURS). I considered that drive too, not least because it is 10% cheaper than the Seagate, but I read some reports of it being noisy on spin-up and spin-down (although quiet in operation) as well as the known head-park issue which can only be disabled if power saving is disabled globally on the drive. The Seagate felt like a better bet.

I installed version 2.12 of the customised firmware prior to proceeding. This version includes several disk management utilities within the firmware itself which allowed me to partition and format the new disk.

The new drive has identical dimensions to the old one (1.03" high) so I didn't expect any problems with the physical installation and it proved to be straightforward.

Opening the case voids the warranty but I only had a short time remaining anyway and had already opened the case some months earlier to remove the orange filter from the vacuum flourescent display (see Fixes / Work Arounds for Known Bugs#Display Too Dim) Still, I like things to be neat so I used a hair drier to melt the glue on the warranty seal rather than breaking it. 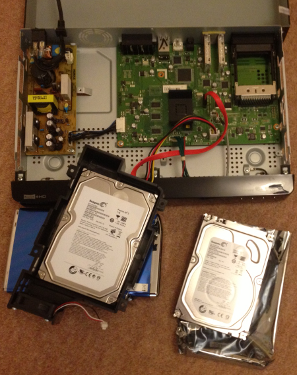 Here's the Humax with the lid off, the old disk to the left and the new one on the right hand side. The old disk is sitting on top of a SATA to USB caddy that I bought for £10 to house the old disk.

After swapping the hard disk I booted the Humax and it displayed a message on the screen saying that I needed to format the storage in order to use recording functions. Fair enough, but I knew that the Humax firmware wouldn't do it so I pressed Exit at that point.

Although the drive uses a 4K sector size, it reports a 512 byte sector size to the operating system and emulates 512-byte sectors in firmware. This emulation is very fast but if the OS modifies a single 512 byte sector then the entire real 4K sector must be read from the disk, the 512 byte range updated and then the 4K sector written back. This requires at least one additional revolution of the disk platter to achieve and degrades performance. Seagate claim that their SmartAlign feature reduces this degradation automatically but they still recommend taking steps to minimise the problem.

The solution is to align your operating system file-system block size with the native sector size of the disk and to ensure that the partitions on the disk are aligned with the 4K sectors. The following diagram illustrates this (note that for simplicity the internal ECC, gap and address marks are not shown - see http://en.wikipedia.org/wiki/Advanced_Format#Advanced_Format_overview if you want a more complete overview of how 4K sectors are implemented)

The first part is easy - ext3 has a default block size of 4096 bytes so maps nicely onto a 4K disk sector. However, just using a 4K file-system block size isn't enough. In the diagram above, file-system block A is not aligned with a disk sector so when block A is changed sectors X and Y must be updated using a read-modify-write sequence including an additional platter rotation. The complete solution requires that partitions are aligned with disk sectors. There's a good article on IBM's web site (http://www.ibm.com/developerworks/linux/library/l-4kb-sector-disks/) on the performance impact of misaligned sectors.

To achieve this, I used the GNU Fdisk (gfdisk) utility which is built into Custom Firmware 2.12 and above. The u command changes the input units from cylinders to sectors. I then just ensured that the start sector of each partition was divisible by 8.

The default Humax partitioning is:

I had to do some shuffling around to work out the sector boundaries to achieve partitions of approximately the correct size. My final partition table looks like this:

Note: The GNU Fdisk program will warn that these partitions do not end on a cylinder boundary. That's fine, Linux does not care.

Once it was defined, I rebooted to make sure the new partition table was refreshed in the kernel.

The default file-systems that are created by the Humax firmware are ext3 with the following key properties:

I created my filesystems using the same parameters apart from following changes:

Next I rebooted the Humax (using the remote control) and when it came back up it created all the necessary directories under the new filesystems automatically and no longer prompted for me to format the storage.

Here's the filesystem parameters for my new video partition:

Having put the old disk into the external USB caddy and connected it, I can see both disks alongside each other and begin to copy the content back across.

The only significant change is to the number of inodes allocated to the AV partition.

Yes, work is being done on this front. Please take a look at how to fit a Humax HDR-Fox T2 with a very large hard drive.