Sweeper is a Custom Firmware package for managing recordings in a variety of ways using custom rules. It started life as a simple utility for tidying up one-off recordings in the top level of the My Video area into folders, hence its name, but has since evolved into a multi-purpose tool.

Once installed, the rules that apply to the recordings and series folders at the top level of the My Video area can be accessed via the Sweeper icon on the main menu or toolbar. It is also possible to define rules for other folders by selecting Sweeper Rules from the OPT+ menu alongside the folder in the web interface. 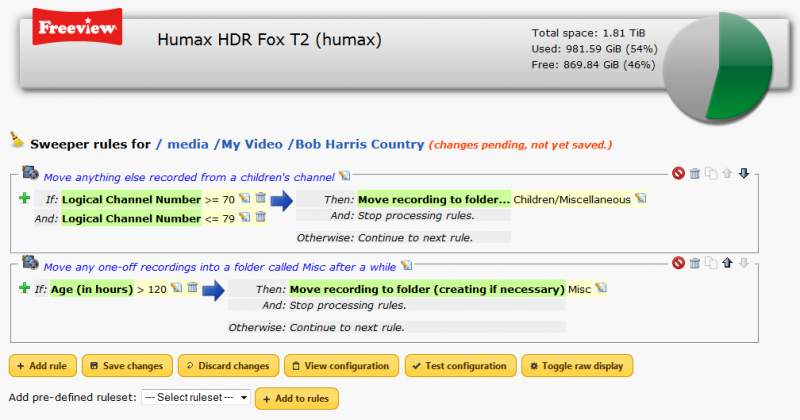 The main sweeper rule screen shows the rules which are currently defined for the folder followed by a set of buttons which can be used to add new rules, save or discard any changes, view or test the configuration and optionally show a textual representation of each rule, updated in real-time as changes are made.

At the bottom of the screen is an option to add a pre-defined ruleset to the rules already on screen. A set of rules can be chosen from the dropdown list and then added to the list of rules with a click on the Add to rules button; once there they can be individually modified, disabled or deleted as required.

All changes made are immediately reflected on screen but no changes are made to the system configuration until the Save changes button is pressed and confirmed.

Anatomy of a Rule

Each rule is shown in a box with an icon to the top left indicating whether it is a file or folder rule...

Several of the rule actions take parameters, and these parameters can contain tokens that are replaced with information from the recording which is being processed. For example, you could use the Move recording to folder action with an argument of %genre which would place Films in a folder called Films, Children's recordings in one called Children, etc.

The available tokens are shown below:

In the configuration file, all conditions can be optionally prefixed with a ! to indicate negation. For example, the condition !lcn 1 means not recorded from channel 1.

When a condition takes a string argument for a match, that can either be a fixed string, a pattern or a regular expression. A fixed string is treated as a substring match - it is just looked for anywhere in the attribute. A regular expression is specified by prefixing it with a ~ character. A pattern is matched against the whole attribute and can contain the following special sequences: