The Humax repeatedly re-boots when powering from standby every few seconds, as this can occur for several reasons you can narrow down the possible causes by disconnecting the red power cable between the main board and the Hard Disk drive while the Humax is disconnected from the mains supply, if the Humax then powers up without re-boots, there are only two reported problems that cause this, one is the presents of a corrupted file on the HDD and the other is a failed capacitor that affects the timing of the HDD turn on procedure, this fix details how to locate and replace the faulty capacitor. The faulty component is a 4u7 (4.7 microfarad) 35V electrolytic capacitor and is located on the front edge of the main board (See red ring in picture)

Here is a close-up of the faulty capacitor

Here is part of the circuit diagram showing the faulty 4u7 capacitor :-

The fix is to replace this capacitor with a 4u7 with a new one, the replacement does not need to be a surface mounted component, a 25V 4u7 radial capacitor can be used, NOTE :- It has been suggested that you can remove the old capacitor by 'twisting' it, however I would not reconmmend doing this as it could damage the board, the component can be removed using a soldering iron on the two visible solder pads (see red pointer above), one at a time

Here is the board with the old capacitor removed :- 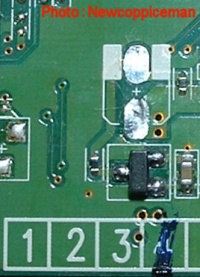 NOTE :- When fitting the new component, the correct polarity MUST be observed, the Negative '-' is furthest away from the edge of the board

Here is the board with the new Radial capacitor installed :- 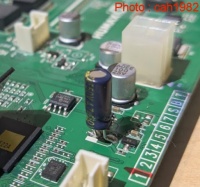 Although quite a few users looked into this re-booting problem, the main credit must go to Newcoppiceman who identified the faulty component, for more details see this post :-

There has been some suggestion that as the Humaxs are getting old that other SMD electrolytic capacitors may also cause problems, however tests by Stummery found no other faulty devices.